Cause for the Chromebook February 9, 2013

Last week I bought the Samsung Chromebook. A few days before, my sister was telling me that she needed something between an iPad and a laptop. The iPad was too expensive (and she couldn't type on it very well anyway). A laptop would go mostly unused since she just browsed the internet and wrote documents.

For the first time since its release, I realized there was a problem that Chromebook solved. I'd been trying to find an excuse to buy one, and she finally gave it to me. Of course before handing it over I had to play with it, so here are some thoughts on it: 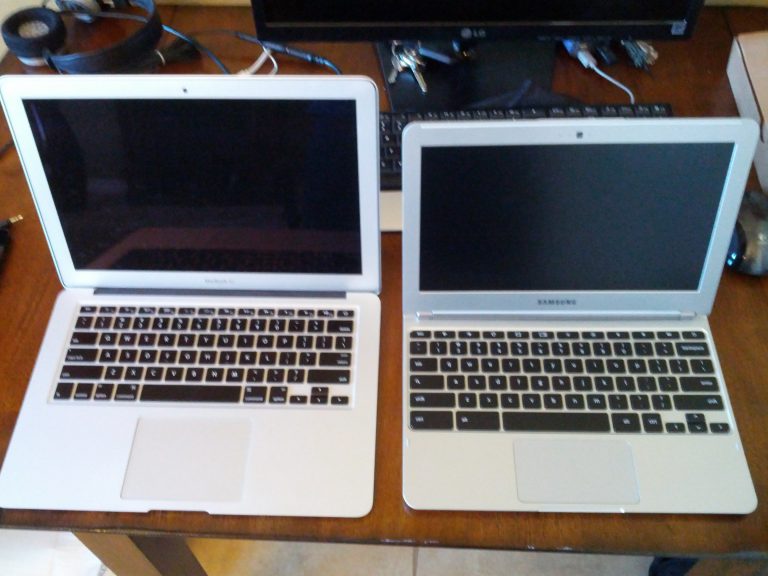 From the looks of it, the hardware is pretty similar to the MacBook air. It's got a grey (but not aluminum) body with white letters on a black keyboard. This blurry picture sets them side-by-side. I'm not sure why my camera wasn't working this day.

With such strong similarities to the MacBook Air, I found it hard to not constantly compare the experience of the two. It is not the same machine, and at \$250 it's not trying to be.

You can really feel that price point in the Chromebook's hardware, though. When opening and closing the top, and feeling the press of the keyboard, this could almost be mistaken for a children's toy. It looks like Apple, but it feels like Fisher-Price. Again - that's not so bad, nor is it hugely unexpected, considering the low cost.

The most impressive thing about the hardware to me is that the machine makes literally no noise. No fan, nothing. I didn't expect to enjoy that as much as I did. I've also read that it doesn't get hot, but I didn't spend enough time with it to be able to speak to that.

Once I had everything setup and started using the Chromebook, one thing kept popping into my head: "They gave this thing the perfect name."

If you wonder what the software experience for the Chromebook is like, just use Chrome on any machine and it's almost exactly like that. The only difference is that, instead of the Chrome Web Store "Apps" being listed on the page when you open a new tab, it lists them at the bottom of your screen in an "Apps" popup.

They stuck to the theme perfectly. While there was nothing surprising or overly exciting about using it, I'm not sure what else I would expect or want.

One thing that's touted by Google in the marketing of the Chromebook was the boot time. While most of my experiences with it so far were a well-rounded "meh," the boot time actually is impressive. Instead of describing it much more, I filmed a video. You can see it took about 11 seconds to show me my login screen.

Despite the lacking hardware, I think the Chromebook is a really great machine considering the price. It perfectly fits a market that wants to do more than just browse and use apps, and doesn't want to pay for the cost of an iPad. My sister was able to get the hang of Google Docs almost immediately, and she enjoys having a physical keyboard to type on.